Microservice is now the architecture of choice for many developers when crafting cloud-native applications. A microservices application is a collection of loosely coupled services that communicate with each other, enhancing collaboration, maintainability, scalability, and deployment. There are several options for enabling this communication between microservices. REST is the most popular among developers, sometimes used synonymously with APIs. However, gRPC can be a better alternative to REST. In this tutorial, you’re going to learn the basics of gRPC and how to get started with it using Python.

gRPC is a high-performance remote procedure call framework built on top of HTTP/2. A client application can directly call a method on a server application on a different machine as if it were a local object, ensuring a smooth client-server integration. gRPC abstracts the process of directly calling a certain endpoint on the server, as you would typically do with REST. 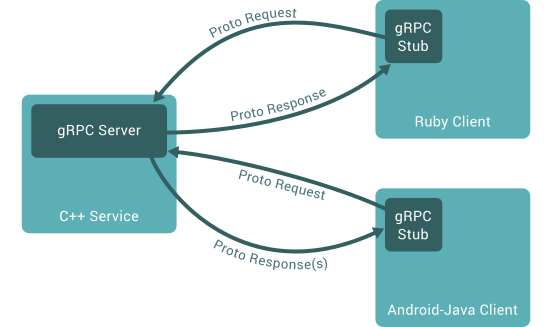 It uses protocol buffers as its interface definition language (IDL) and for data serialization as it handles client-server communications. Proto buffers will be discussed in more detail below, but you can also check the documentation for more information.

It’s true that REST can seem like the best option in many cases. REST offers a mature ecosystem with a lot of support and tools for multiple languages; however, it has some trade-offs, including low consistency when integrating an API across different languages and more difficult, higher-latency streaming. This is where gRPC comes into play.

Here are some of the benefits that gRPC offers:

The framework is designed to work with multiple languages. The server will always get the same kind of request, no matter what language the client uses. This also applies to the client, thus enforcing consistency in API communication.

gRPC offers better speeds than REST, GraphQL, and SOAP because it uses protocol buffers for data serialization instead of JSON or XML. This makes the payload smaller and faster.

Using the protoc or protocol buffers compiler, you can easily compile the .proto files into language-specific code. This simplifies the process of building your API service and client libraries.

Getting Started with gRPC in Python

Now that you know more about gRPC, you’re going to see it in action. This tutorial will show you how to create a simple API service and client that fetches real-time prices for cryptocurrencies.

To follow this tutorial, you’ll need the following dependencies:

Use the following commands to install the dependencies on your machine:

When you’re creating API services and clients with gRPC, you will usually follow this workflow:

In gRPC, the structure of the incoming request, outgoing response, and handling method must be predefined in the .proto file(s). The incoming request and outgoing response are usually defined as messages. The handling method is defined as an RPC method with input and output messages, and these RPC methods are organized into groups known as a service. One .proto file can consist of multiple services, and each service can have multiple methods.

Such a service in gRPC should look something like this:

To create this in gRPC, create a new .proto file as shown below:

Here is how a protocol buffer definition will look. Copy and paste the below code to the crypto_service.proto file you created:

Now you have a proto buffer definition for the crypto service. The next step is using the protoc compiler to compile the crypto_service.proto file to code artifacts. You can use a single command to do this through your terminal (or command prompt for Windows users), as shown below:

When you run the above command, it will generate two Python files from crypto_service.proto named:

You can look at the contents of the files, but don’t worry about them because you’re not going to edit them. If you check crypto_service_pb2_grpc.py, you will notice there are three classes generated, two of which are GExchangeServicer and GExchangeStub. You’re going to use them to implement server-side code and client code, respectively.

Next, you’re going to implement the gRPC server from generated artifacts and create a new Python file within the same directory titled crypto_server.py.

You’ll need to first import all the necessary requirements, then create a class that will inherit GExchangeServicer. Its methods will have the same name as defined in the crypto_service.proto file. For this tutorial, the name is get_price as shown below:

The only thing your gRPC server needs to be complete is the instruction for your service and the initial dummy data to query from. You’re going to use Python’s built-in feature futures, gRPC library with some components from generated artifacts to instruct your Python code on how to run the GExchange service. Once you add them, your code should look like this:

You can now run the gRPC service as you would normally run the Python script, as shown below:

In this section, you will learn how to implement a gRPC client in Python. First, create a new Python file, fetch_prices.py.

Import all the necessary libraries and then create a class for your client. In the class constructor, create a stub or client that will connect to a gRPC. Here’s how to do that:

Finally, create a method that will receive a cryptocurrency name as string, transform it into a message object, use the stub to send a request to the gRPC server, then return the response. Your code should look like this:

Your gRPC server should already be running. If not, run it first; otherwise, your client scripts will raise an exception. Once you do that, you’re ready to go.

After running, your script should be able to effectively communicate with the gRPC server, and the response should look like what’s shown above since you used the same example for the data.

Now you should have a better understanding of gRPC and how to use it as a Python developer. This tutorial demonstrated unary RPCs, in which a client sends a single request to a server and gets a single response back. There are multiple types of gRPC implementation, and today’s exercise is just the beginning of what you can learn.

Using gRPC can offer better performance and more flexibility for communications between your microservices. For more examples of using gRPC in Python, check its GitHub site.

Mechatronics Engineer and Experienced Python Developer with expertise in building (Web|Mobile) Backends, DataScience solutions, IoT Architectures, Microservices, and DevOps. Also, I have one year of experience working as a technical content creator focusing mainly on Python stack, My articles on platforms like Dev.to and Hackernoon have crossed 130K readers.